Results from a survey conducted by AMA Insurance have been released to show the most popular non-work activities that physicians enjoy. A quick glance at the image shows the most popular hobbies, but more can be seen in the article found here. 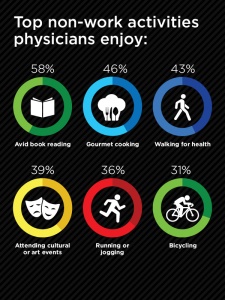 In a recent study, researchers found a correlation between hugs and rates of infection with the common cold… who knew?!

A new study published on September 3 in Neurology and reported on Medscape shows that poor sleep quality may actually lead to brain atrophy. Using 147 people ranging from 20 to 84 years in age, researchers submitted participants to MRI scanning over several years. Sleep quality was measured by a self-administered exam. Additional testing parameters included physical activity, BMI and blood pressure. The results were as follows:

Further research will need to determine whether poor sleep is the cause of brain atrophy or a result of brain atrophy. However, such research could also shed light onto various diseases of cognitive decline.

According a a recent AP article by Lindsey Tanner, a double mastectomy (removal of both breasts) as treatment for breast cancer does not increase chances of survival. Many women are choosing to undergo double mastectomies as opposed to a lumpectomy + radiation therapy. Some key points of the study include:

With the rising frequency of women undergoing double mastectomies, this is definitely a topic that needs further investigation. It actually reminds my of a book I read that discussed the widespread use of radical mastectomies before it was realized that a radical mastectomy was an unnecessarily extensive treatment that yielded no improvement in outcome. I suggest others take a look into the history of breast cancer treatment after reading this interesting article.

A recent AMA Wire article discussed seven ways to improve blood pressure readings. Although the factors may seem arbitrary at first glance, they have been shown to significantly impact results.

Check out the article through the link above or at least give the following image a quick glance. 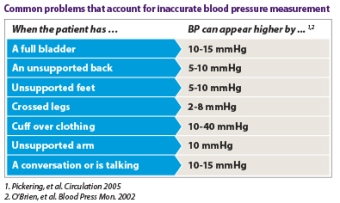 Studying is Damaging Your Vision!

Recent research indicates that studying may actually make your nearsighted! An article on the New York Times website provides the details, but ultimately, the more years of education a person completes, the greater their likelihood of developing myopia. Unfortunately, the article doesn’t list any ways to reduce risks of nearsightedness, so I guess all of us lifelong learners will just have to take our chances for now!

How Germy Is Your Doctor’s Stethoscope?

A pretty interesting study conducted by the University of Geneva looked at just how much bacteria can remain on a physician’s stethoscope after seeing patients. Turns out it’s even more than most parts of a physician’s hands.

An important factor to consider in all of this that was mentioned is how there are guidelines everyone regarding healthcare professionals washing their hands. However, there are no guidelines for washing stethoscopes. Looks like there might be in the near future.

How Germy Is Your Doctor’s Stethoscope?

First, let me say that I am by no means advocating going into medicine for money.

Second, I don’t advocate choosing your specialty based on money.

Third, I strongly discourage going into medicine and/or choosing a specialty based on money! If you do, I can assure you that you’ll most likely hate your life at some point in your career.

That being said, people often like to have an idea of physician compensation in various specialties so I figured this would be a worthwhile post. I personally think it’s interesting to see the disparities in certain fields of medicine.

I came across the Medscape Physician Compensation Report while searching around the Medscape website. According to the 2012 data, orthopedics takes the top spot with HIV/ID taking last.

ObamaCare & Incentives for the Prevention of Chronic Diseases

As I’ve said previously, I’ve been extremely interested in health policies lately and have been attempting to thoroughly educate myself on the Affordable Care Act, aka ObamaCare. I found a “Fact Sheet” discussing a variety of programs for Medicaid patients that provide incentives for adopting health lifestyle choices. The grants provided must be used to address one of the following:

For example, I read about smoking cessation programs offering money to participants for making phone calls to helplines when they feel like smoking in order to prevent relapse. Offering phone support services is great. Sometimes people just need someone to talk to when they are having a hard time. Offering money for people to use the services is just asking to get ripped off. People can easily abuse the system, make the phone call, and then hang up and smoke their cigarette anyway.

I won’t go into details about every program I disagree with, but I think there are some characteristics that a program must possess in order to be successful.

I decided to post this without much thought, so hopefully my thoughts are at least mostly complete.

Feel free to comment with your own opinions. I always enjoy hearing what others think.

An article on Yahoo regarding the most recent strain of bird flu H7N9 has raised some reasons for concerns. The newest strain first arose in China this past March, killing 37 people of the 130 infected. Scientists have declared the death rate to be about 36 percent. Although this is lower than the rate of 70 percent for the H5N1 strain, H7N9 has been shown to spread faster. Since it’s more deadly than swine flu, the cause of a global pandemic in 2009, the risk of a pandemic is very serious.

Although much of the global population focuses on the fatality rate for serious illness, the rate of infection is of paramount importance as well. Although a disease could be 100% fatal, if it doesn’t spread easily, it is more likely to be contained.

Below is a short thought-experiment demonstrating the important of infection rates.

Say that a deadly disease infected 100,000 people who all died as a result. Obviously, there is a casualty rate of 100,000 people. On the other hand, a flu strain that is 36 percent deadly and spreads to 1 million people (10 times more infectious) would leave 360,000 dead in its wake, as well as the 640,000 people requiring medical treatment. The strain that infected 10 times more people, although about 1/3 as fatal, caused massive destruction in comparison to the 100 percent fatal disease. If you total up the costs, the more highly infectious disease is also the most costly.

People should realize that infection rates and fatality rates must be considered in tandem. The risk of a global pandemic is highly dependent on both sets of data. Hopefully, the latest strain of bird flu will be contained as much as possible. However, the risk of a pandemic is always present.